Thanks to Siena Heights University, Klemm Gallery, the art faculty and especially Natalie and Tim for having Craig and I as visiting artists in conjunction with our collaborative exhibition,  Collection.  We started this work at our residency this summer, 2012 at the Archie Bray Foundation in Helena, Montana and though we didn't come away with many finished pieces, we were able to work through the collaborative process and begin working out ideas we developed further at home in Wisconsin.
Both of us are interested in how objects act as intermediaries between our lived experience, memory and transformation.  I think that we ultimately found ways to respond and elaborate upon object images in an improvisational way that allowed each of us to follow that pathway to wherever it led.

Two of the three pieces in Eden? were really the only finished pieces from the summer.  We made some of the flowers in Floriculture, but never saw it complete until Craig assembled part of it in our garage before we left for Michigan.  We had to assemble the work in the space to really see it finished.

Floriculture was an exploration of working with the material in a more direct and playful way as well as a way to define a space without the heaviness that often comes with clay.  Craig, our former student Elyse and I made the pieces together over a period of time and I like the idea of various hands and experiences being brought together under the umbrella of the same idea.
Sometimes I would cringe at the flowers they were making, but I just had to go with it and once they were finished  we saw how the variation of touch and form in the flowers really made the work more compelling.  The colors act as a counterpoint to the lack of color on the walls and is something that we are interested in expanding as a more participatory element in the work.
Plush has a relationship with Replica/ Echo in that the individual pieces are things in themselves and the shadow of these things.  Most of the materials are stuffed animals that we bought in bags from the thrift store.  These things were sad and bittersweet and seemed to be in the same category of sad miniature teacups left behind in the antique mall.  The dipped and imbedded pieces are really the shadows of the things as the original item is destroyed in the making, while the real bundled objects are the obscured counterpoint to these images.  The undipped pieces are bundled and obscured with yarn and other bric a brac some of which are repeated in Replica/ Echo.

I do think that being surrounded by a toddler and their fixation on stuffed animals influenced this work. They carry an emotional weight that is eventually cast away until the animals themselves end up in a big plastic bag in the thrift store.

Replica/ Echo started with Craig's coke bottles and other common images from mass culture, like gremlins, gnomes and other objects that are often imbedded in his pieces.  He wanted to use them in the work, but I was hesitant to say the least since a coke bottle seemed to have no gravitas. Once I began to think about it in relationship to drawing, I began to see the possibilities in incorporating and transforming objects that announce their ordinariness.  Craig's individual work is an investigation of the transformation of images, so working with this idea in a different way seemed fitting.

I was struck how these objects that seemed so banal were the same objects I often put together to create a still life for my students.  I thought about how the process of drawing can force the investigation of the mundane object and through that process transform it.  We decided to create a grouping of ordinary objects in a series that explored the thing itself, the cast image and the 'sketched' copy in porcelain.  Craig wanted to use forms from the hardware store as presentation, but instead decided to make tactile replicas that were cast to create multiples. 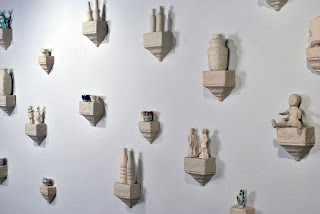 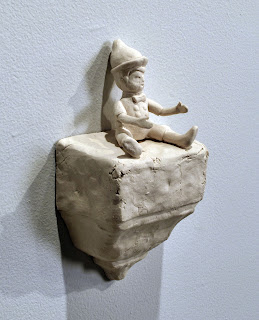 Most of the objects are from the thrift store or are figurines and images we have used in our work.  I've always had an interest in the idea of ordinariness and was able to incorporate objects that didn't really seem compelling at first, like the coke bottle or the furby, but that become compelling during the process of repetition and drawing.

This way of creating collections and forms with repeating shapes informed much of the other work as well.  The sculptural forms in the Reclamation Series were created with cast found bottles, objects and ceramic waste material from the studio.  The individual forms echo some of the pieces in Replica/ Echo and also play with the idea of function in that they and almost all the other objects in the exhibition share a relationship to the body and need the body or an action to animate them.

These are images of the Tangible Series and for me all of the pieces have to do with touch and the animation of objects.  In my own work I like to use objects that carry implications, such as keys or locks, but Craig has also made tools and other implements that are like extensions of the hand and these can also carry multiple implications.  I began by making the hammer and moved on to the ax or hatchet while Craig cast these images from found objects, I sketched them out in porcelain.

This last piece, Garland was a three way collaboration between myself, Elyse and Craig.  I have been making flower rounds in my own work and Craig and I created a collaborative flower form at the Bray, and though we never used it, it acted as a starting point for these pieces.  They allowed me to veer away from the 'crafted' image and rather explore the direct influence of the hand as well as give over their finishing to someone else.

I think of the work and exhibition as a work in progress and a way to open myself up to different ways of seeing and working.  Teaching drawing and foundations has expanded my interest in materiality and the presentation of objects.  Although all of the pieces are 'crafted' in some way, I am not necessarily interested in craftsmanship and facility with material being the focus of what I am making and am gravitating towards letting the images and material speak for itself.

I will be posting more work on my website after the school term is over in mid November at www.debbiekupinsky.com and you can view Craig's work at www.craigcliffordceramics.com.  His solo show goes up at Pewabic Pottery in Detroit on January 25th, 2013.

Thanks to everyone at the Archie Bray Foundation for all their great support and being as wonderful as ever.